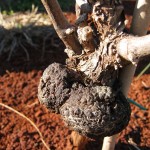 Typical symptom of crown gall is a formation of galls (size varies from as small as a tip of pencil to as large as a golf ball) on affected trunk or cordon, which is a result of abnormal cell production due to the infection by a bacterial pathogen, Rhizobium vitis (= Agrobacterium vitis).  Immature galls tend to be reddish brown in color, and as they mature, they become very dark brown or black.  Often time you will observe formation of galls at lower part of the trunk, but with severe infection, you may see a series of galls formed along one side of a trunk.   The gall formation can affect vascular tissue of the vine, thus, the first symptom you may observe on green tissues can be that of water stressed type, such as marginal browning of leaves, reddening of leaves, or sudden collapse of a vine.  This pathogen infect grape tissues through wounds, thus, this disease is often associated with vines grown under cold climates or suffered freeze injury. However, other causes for wounding, such as mechanical injury by human or animal activities (e.g., feeding, weed eater injury, grafting, etc.) can be the entry point for this pathogen.

Causal Agent: Rhizobium vitis (= Agrobacterium vitis) is a bacteria resides on the surface of grapevines.  It inserts it’s DNA (T-DNA) into grapevine cells causing a hormone change in the vine that signals gall production.

Management: Rhizobium vitis is introduced into a vineyard via infected plant stock, that is typically non-symptomatic until vine is injured.  Once infected, you may able to retrain the trunk by pruning the affected trunk below the symptomatic area to promote new growth.  However, R. vitis is a systemic bacterium that survives in all woody tissue and roots for years, thus, eradication of the infected vine is the only true remedy.

Other competitive strains of Agrobacterium are being tested for efficacy in vineyards as a possible biological control of A. vitis.