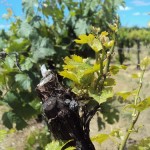 Eutypa Dieback, also known as a part of “dead arm” complex, is a destructive woody tissue disease. Symptoms typically become visible on vineyards that are 6 or more years old, even though the infection might have occurred several years prior to symptom expression. The first symptom to appear is a canker, usually on the main trunk, a flat elongated discoloration found under the bark, surrounded by healthy tissue. Cross Section of canker reveals a “V” or wedge shaped piece of necrotic wood; however, these symptoms are very similar to that of Botryosphaeria canker. However, with Eutypa, delayed shoot emergence and stunted shoot symptoms are most visible in the spring, and may recover as the season progresses. Leaves on stunted shoots are chlorotic (yellow), cupped upwards, and are often misshaped. Non uniform berry size is another common symptom in severe Eutypa infections.

Causal Agent: Eutypa lata, E. leptoplaca, and other fungi in the Diatrypaceae family are the causal agents of Eutypa Dieback. Spore released by rain, spread by air and water to open pruning wounds.

Management: The prevention at the time of winter pruning is the best approach for the management.  Double pruning, protection of pruning wound using paint with boron (trade name: B-Lock), as well as chemical control, such as use of thiophanate-methyl (trade name: Topsin-M) and/or myclobutanil (trade name: Rally) to protect pruning wounds are known to reduce risk of infection to pruning wounds.  Also, it is advised to prune vines on a day followed with several days of sunny condition.  (I.e., avoid pruning before the rain).  If you decided to use aforementioned fungicides, make sure to obtain the label for the specific uses.  Although symptom appears in the vineyard after 5-10 years of planting, young vines are as susceptible as the old vines; therefore, it is advised to implement a management plan from early years of the vineyard.

For infected unproductive vines, remove infected trunk or cordon arm 12 inches below canker, and move the infected woods out from the vineyard for burying or burning. Vine health is extremely important for the recovery after the major pruning of cordon or trunk. Provide sufficient water and nutrients to encourage healthy vegetative growth.