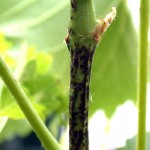 Phomopsis is commonly known as an early season foliar and shoot disease that favors prolonged wet periods and cool temps.  However, it also infects canes and was considered as a part of “dead arm” complex in the past.  Lower internodes of shoots and basal leaves develop symptoms first. Leaves develop small (< 1/8 inches) yellow spots which may become dark specks with yellow halos and then the center of the lesion may eventually fall out to create a shot hole symptom. Dark sunken necrotic lesions on the shoots starts as spots, but as the season progresses, it can enlongate, sometime coalesce, and sometimes become scabby. Infection can happen on the rachis to cause premature drop of berries, as well as on berries to cause rot. Phomopsis symptoms on canes become visible during the dormant season. Often time, canes look bleached in color, and formation of fungal fruiting structures, which is in a size of a ground black pepper and dark in color, maybe observed.

Causal agent: Phomopsis viticola is the fungal species responsible Phomopsis cane and leaf spot on grapes. P. viticola can resides on previously infected canes and cordons to cause infection in the spring.

Management: Phomopsis spores are released in spring following bud breaking during prolonged wet periods with cool temperatures. Infection occurs 3-4 weeks before symptoms appear, therefore early season fungicide programs are essential for control of the disease. Application of mancozeb or captan product starting when shoots are 1-2 inches in length is often recommended.  Thus, fungicide applications should be considered when precipitation is expected after budbreak, and depending on the frequency of rain event, a strict spray schedule (7- 10 day interval) may be applied until shoots reach approximately 6 nodes. After this period, many fungicides recommended for black rot and/or downy mildew can also be used to protect tissues from Phomopsis infection.
Cultural management practices involve reducing the amount of inoculum in the vineyard, by removing symptomatic canes, dead spurs, and cordons. Canopy management practice that promotes good air flow and reduces leaf wetness periods of vines is also important to reduce the risk of infection on green tissues in the spring.