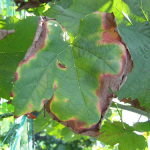 Pierce’s Disease, commonly referred as PD, is caused by a bacterium (Xylella fastidiosa) that reproduces in the grapevine xylem and clogs the water conductivity system. This blockage induces heat- and water-stress type symptoms in times when water and nutrient conductivity in vines is greatest, such as late summer or around the time of veraison. The symptoms may only appear on a few shoots in the first few years of infection. Often time, uneven leaf scorching with a red or yellow margin starts from the outer edges of leaves. Another symptom of PD is called ‘matchsticking’ and occurs when leaves fall off, but petioles are retained on the shoot with the tip looking burnt at one end. Also infected shoots may have irregular formation of lignin which becomes apparent when shoot tissue remain green near nodes while surrounding tissues lignified and become brown. Clusters can shrivel and drop due to water stress caused by PD.

Vines become infected by a number of vector species, the glassy-winged sharpshooter and other Sharpshooter and leafhopper species, that carry the bacteria and is transmitted by the insect  feeding on the vine’s green tissue. When spring time infections occurs  the bacteria is allowed to move further through the vine, and it’s more likely that the vine will not overcome the infection. The bacterium is sensitive to cold temperatures and therefore more predominate in mild wintered grape growing regions.

Vines become infected by a number of vector species, the glassy-winged sharpshooter and other sharpshooter leafhopper species. X. fastidiosa causes systemic infection, and the risk of the movement of the bacterium to the main trunk is higher with infection happened during the spring because of the length of time for the bacterium to be transferred. The bacterium is sensitive to cold temperatures and therefore more predominate in grape growing regions with mild winters.

Causal Agent: Xylella fastidiosa is a gram negative rod-shaped bacterium, specific to grapevines and is native to North America. Therefore, native and wild grapevines are more tolerant of infections, but these non-symptomatic vines can still be a source of inoculum in the vineyard or surrounding areas.

Management: Vector management is important to limit the spread of Pierce’s disease in the vineyard, since there is no chemical treatment that controls X. fastidiosa in grapevines. If possible, eliminate potential habitats for the vector insects.  Sweep sampling for vectors should begin at budbreak and continue for several weeks to monitor vector populations in the vineyards and neighboring wood lands or crops in order to determine the site specific risk level and spray timings. Intensive insecticide spray programs can be applied to vineyards and adjacent areas to create an effective buffer against vectors. Check with your local extension agent or crop consultants for available PD management programs.

Another potential approach, especially in the southeastern US where disease pressure is very high, is the use of disease tolerant wine grape cultivars, such as Lenoir (Black Spanish) and Lomanto, which can withstand X. fastidiosa infection.