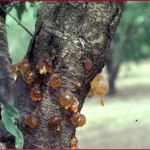 Link to presentation: Identifying sources of resistance in Pistachio and Almond cultivars 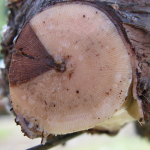 Rohslausen discusses how cell wall chemical composition and differences in wood anatomy could be responsible for variance in susceptibility between different cultivars.

Link to the presentation: “Identifying biochemical and anatomical markers of resistance in grape, almond & pistachio wood“ Link to the presentation: “Baumgartner and Travadon presentation for the board meeting 2014” 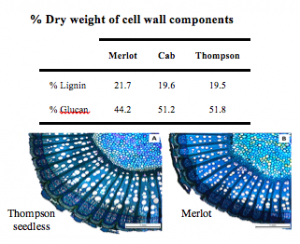 Significant Outcomes & Impacts – These markers of Eutypa resistance will compliment the detached-cane screening method, to provide additional measures of resistance. This is important because we are evaluating genetically-diverse germplasm, which may exhibit different modes of resistance. These markers are now being evaluated for the other trunk diseases (Botryosphaeria dieback, Esca, Phomopsis dieback), along with the detached-cane method of screening.

Goal – Identify new commercial cultivars with resistance to the most aggressive causal agents of Panicle blight of pistachio.

Activities
Evaluated resistance in all susceptible tissues (green tissues: panicles & fruit, woody tissues: stem) with the three most aggressive pathogens (Botryosphaeria dothidea, Neofusicoccum mediterraneum, and Lasiodiplodia citricola), either alone or in combination.  Inoculations were done on mature trees in an experimental orchard. 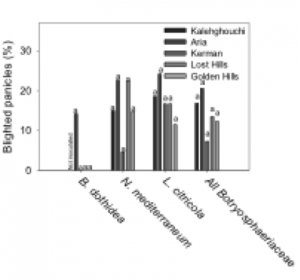 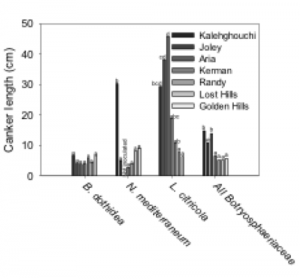 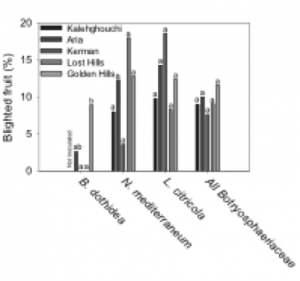 Results & Outputs
To identify resistant germplasm, stem inoculations are required.  Inoculation of green tissues leads to blighted panicles and fruit. However, results were not different among cultivars and all three pathogen species colonized equally. In contrast, inoculation of stems lead to cankers of different lengths, depending on the cultivar and the pathogen.

Kerman, which makes up >90% of California pistachio acreage, showed an intermediate level of resistance, with cankers ranging from 5 to 20 cm. Even more resistant (i.e., with smaller cankers) were new cultivars Golden Hills, Lost Hills, and Randy. New cultivars Kalehghouchi, Joley, and Aria were most susceptible than Kerman. Among the pathogens, Lasiodiplodia citricola was the most aggressive species (i.e., caused the largest cankers) on all seven cultivars, including Kerman.

Significant Outcomes & Impacts
Several new cultivars – Golden Hills, Lost Hills – are more resistant than Kerman. The inoculation method we developed will be important for evaluating preventative fungicides, esp. given that even the most resistant cultivars still develop cankers.

Goals– To identify rates of wood-canker infections within almond orchards, determine management practices, identify the pathogens present in the orchard, and climate conditions conducive for sporulation in order to increase orchard 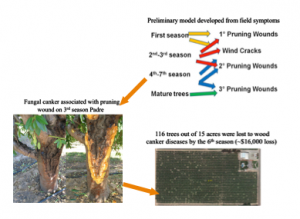 Goal – Identify almond cultivars with resistance to the most aggressive causal agents of wood-canker diseases of almond: Band canker and Lower limb dieback.

Results & Outputs
Peerless was the most resistant to both species of the pathogen. Carmel, Sonora, and Padre were among most susceptible, with some differences depending on the species. Susceptible cultivars had the highest mortality. Cankers were so severe in Sonora that 50% of the trees died after 10 months. This means that infections of young trees, esp. of susceptible cultivars, must be protected in young orchards.

Significant Outcomes & Impacts
Now that we know the causal agents, we must identify preventative practices. 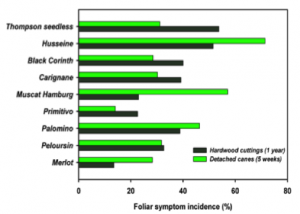 Results & Outputs
Merlot and Primitivo were most resistant to Eutypa dieback, based on both methods (hardwood cuttings and detached canes). However, the detached-cane method – a rapid alternative that takes only 5 weeks – differentiated cultivars similarly to the hardwood-cutting method, which is the standard in most labs.

Significant Outcomes & Impacts
The detached-cane method will serve as a phenotyping assay for use with materials from VitisGen and other grape breeding projects. In this way, our SCRI project builds on other SCRI projects that have already completed major genotyping efforts.