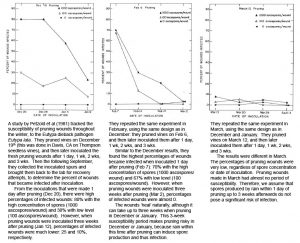 (December & January, sometimes even in February) are more susceptible to infection than wounds made later in the dormant season (March) because: 1) winter rains induce spore release and there tends to be more rain (and more spores) in early winter, and 2) cold temperatures are thought to lengthen the wound-healing process and early winter tends to be colder (Figure 5).

When compared to pruning in December, pruning in January and, in some studies, in February, has not been shown to significantly reduce pruning-wound infections or to reduce the susceptibility period (Table 1).  If you cannot prune your entire acreage in March, therefore, we recommend using a pruning-wound protectant after pruning or to use double pruning (see below).

This is a modification of delayed pruning for cordon-trained, spur-pruned vineyards and involves two passes: